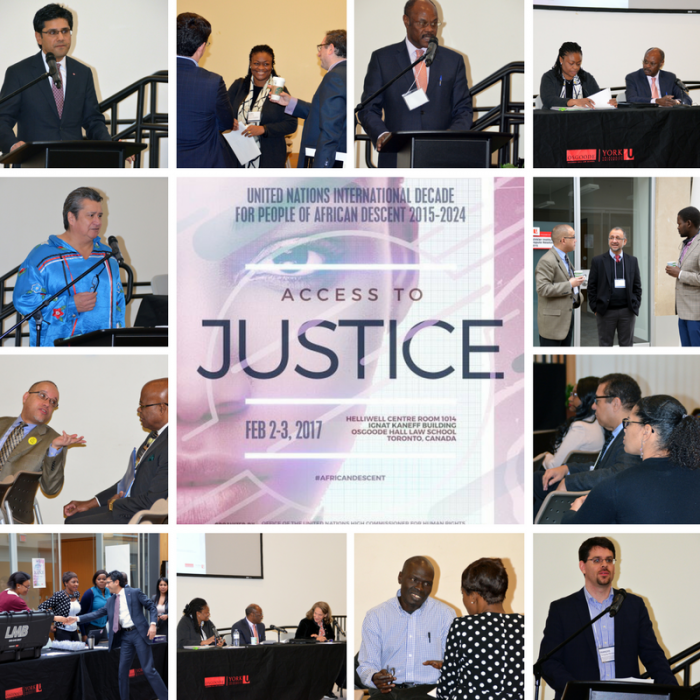 The United Nations Office of the High Commissioner for Human Rights (OHCHR), in cooperation with the Nathanson Centre for Transnational Human Rights, Crime and Security at Osgoode Hall Law School, York University, Canada, organised a 2-day expert seminar to mark the United Nations International Decade for People of African Descent. This seminar is part of worldwide efforts to effectively implement the programme of activities, adopted by a United Nations General Assembly resolution on the 1st of December 2014. Canadian and international experts brought their unique perspectives on the 2nd and 3rd of February 2017 at the Helliwell Centre in the Osgoode Hall Law School of York University.

The seminar examined the elements of “access to justice” in relation to the lived experiences of people of African descent, under the “Justice” theme of the Decade. The seminar also raised awareness on the need to strengthen national, regional and international action and cooperation in relation to the full enjoyment of economic, social, cultural, civil and political rights of people of African descent.

While the seminar took place in Canada and considered the Canadian context and her national legal framework, it also had an international focus. Experts from around the world attended and spoke at the event and hundreds of thousands of people participated online through social media. Participants shared their stories and contributed to the conversation.  It was a unique gathering of legal thinkers and legal practitioners, defense counsel, law students, academics, police services, judicial officials, Government representatives, and civil society activists to discuss these issues together, and provide a practical contribution to the International Decade for People of African descent.

Professor Obiora Okafor, Project Director of E-CASSARE; York Research Chair in International and Transnational Legal Studies of Osgoode Hall Law School and Member of the United Nations Human Rights Council Advisory Committee, called on states to commemorate the launch of the International Decade at the national level, develop national programmes of action and activities for the full and effective implementation of the Decade; and to also organize national conferences and other events aimed at triggering an open debate and raising awareness on the fight against racism, racial discrimination, xenophobia and related intolerance, with the participation of all relevant stakeholders, including government, civil society representatives and individuals or groups of individuals who are victims.

A primer of the expert presentations on access to justice will be published in the coming months as a contribution to the Decade.

The seminar was attended by several experts and stakeholders from within and outside Canada. Also in attendance were the Lieutenant Governor of Ontario, the Honourable Elizabeth Dowdeswell, OC, OOnt (Representative of Her Majesty The Queen); The Attorney General of Ontario, Honourable Minister Yasir Naqvi; the President & Vice-Chancellor of York University, Mamdouh Shoukri; the Dean Faculty of Law, Professor Lorne Sossin; the Chief of the Mississaugas of the Credit First Nation, R. Stacey LaForme; Expert of the United Nations Working Group for People of African Descent  and Professor at the University Paris V-Descartes, Mireille Fanon-Mendes-France; Member of the United Nations Committee on the Elimination of Racial Discrimination, Verene Sheppard; a Rtd Justice of the British Columbia Supreme Court, Honourable Selwyn Romilly; and several other dignitaries including the Member of Parliament for Whitby, the Honourable Celina Caesar-Chavannes.

Short Clip: Prof Obiora Okafor, speaking on the need for engagement at both local and international levels.

“There is the need to engage; to engage more; and perhaps engage more skillfully with the U.N. system, international organizations, and with alternative fora, to combine the levels of struggles…  We have talked about the importance of local action but there are also ways in which the local can reinforce the global and vice versa”